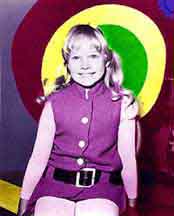 This is Shirley
She was known as "Charley" on the Banana Splits and Friends Show.
I've had the greatest pleasure getting E-mail from people who've played characters on Hanna Barbara TV shows. One I've received recently
was from Sheri Freedman who played Charley, the "Sour Grapes Messenger Girl" on the Banana Splits Show in 1968. Her name as a child was Shirley Hillstrom. There were four other girls who played the part of Charley but none as memorable as Shirley. Here is a really nice letter I'd like to share with all you Banana Splits fans out there surfing the net.
Her letter reads as follows:
Truly, I wasn't kidding about that being my 15 minutes of fame! Before I got the Hanna Barbera gig, I did a bit in a Armor Star Hog Dog commercial with a bunch of kids singing the song and playing on some weird props munching hot dogs. Now for the fun stuff.... I was taking classes at a dance studio, when they got info about a Hanna Barbera audition, and the owner suggested that my mom take me. To prepare myself, my older sister who was at one time a professional dancer herself, showed me all the latest moves....The Pony, the Swim, etc. So I went on this "cattle call" with girls from different dance studios all over L.A. and I made the cut.
Then I went on an individual audition. I remember being told to go into this room, and there was a man (some head honcho) sitting in a chair that I was to dance up to. I did the "Skate" and I remember smiling a lot, and I remember he was grinning away. I must have charmed him 'cause I got the job. On the set, to me, everything looked really big! The Banana split characters costumes looked massive and I do remember comments about how hot they were! The actors were really nice. Especially Danny. He seemed to be the friendliest, and was easiest to pal around with, and he was sooo cute! All us little girls would start giggling and whispering when he showed up! All the girls were really nice too. I'm desperately trying to find the cut out from the TV guide with everybody's names on it. I remember Monica and I think there was a Julie. She may have been the one who was a year or two older. She was so pretty, I thought she should be a model! I don't remember the choreographer's name, but he worked real well with us kids. He was patient and made it so much fun! He was a tall thin black guy that epitomized the term "Groovy baby!" I seem to remember striped bell bottoms, sideburns, and a "pork-pie" hat! (a style of hat that was very popular with jazz musicians, very hip!)

A real funny vivid memory was him showing us the move to put the "cherries" on top during the Banana Splits dance. The way he wriggled his shoulders and butt was so funny! We were all trying so hard to imitate it! When they were filming all us girls and characters doing the B. S. dance, at some point one of the guys, Snorky maybe, bumped into me and almost knocked me down! The director shouted "keep dancing Shirley!" Oh, I did! We had some drama on the set one day. The characters were filming, and after the director yelled "cut", Snorky immediately took the top of his costume off and he was bleeding from the head big time! Apparently, a huge wire from inside the suit snapped and put a huge gash in his forehead! Well, apart from tending to his wound everyone was praising him for not stopping the shoot! I remember people patting him on the back, and someone shouting, "now that's a professional!" over and over. It made a big impression on me! Between you and me, (giggle) I was also just fascinated how much the grown ups were fussing over him! I've since realized it was my first lesson in "kissing ass"! He did deserve it though!
As for the short skirt? Hey! It was the year of the "micro-mini!" Yep, I'm not making it up! Also, once and for all! I was just the messenger girl!! I was not an actual evil Sour Grape! Okay, I confess, I did work for those no gooders...but do you know what hell I went through defending my good name?!!
Well, there ya go! Again, the details are for your enjoyment, I continued to enjoy music and dance all through high school. Shortly afterwards, I raised a family. I have two boys. Shaun 18 and Scotty 7. I'm a stay at home mom involved in the little one's school, Boy Scouts, and sports. The whole Donna Reed thing. My older son just passed the test (with flying colors I might add) to join the Marines, and his goal is to become a police officer. My personal passions are playing piano, studying religious history and philosophy, (I love Dennis Prager, I have many of his books and CD Rom and get his newsletter.) and being a music lover, I'm huge James Horner fan, I've loved him since Braveheart and was so thrilled when he won the Oscar for Titanic! I own 35 of his CDs (so far).